First word to the world

After weeks of hard work (understanding and adapting the OCF format, then hacking the ELF format), I have got Herschel to produce a module that imports a host library (.so) and then to link it into an ELF executable. Upon invocation, it is linked (by the operating system) to the libraries, after which it prints it’s first 3-letter word - Herschel’s first word to the world.

The example below calls libc’s *puts() *function. Calling an external library implies using the appropriate calling convention - in this case, System V ABI calling convention. For those of our readers who are not in the know - it is WAY more complicated from a compiler writer’s perspective than the good old [ccall] convention, and CP2’s native convention. I had to implement parts of it.

As you can see in the example below, I also had to implement (partially) the [code] procedures in order to exit() from the host os process gracefully - it is done thru an interrupt call.

Another major bulk of work I had to do - the OCF file format. Herschel now outputs OCF files; they cannot be read by the 32bit BlackBox because I had to add two fields to the format to provide support for 64-bit System V ABI. At first it seemed rather compilcated, but now, ‘on the other side of the hill’, I would say OCF is reasonable, purpose-driven, resource-savvy, beautifull and minimalistic. To learn and adapt it, I produced an OCF importer - somewhat more detailed than the one shipped with BlackBox. One feature I’m particularly happy with is decoding variable and procedure names in the disassembly of the module text.

Quite a mountain of work since the last status update! Now - on to PE format, so that our Windows-based users could write their own first words in 64-bit BlackBox!

Thank you to the donors who help do this work.

If you’re interested in having a 64-bit CP compiler and BlackBox, get invested in it as well - consider donating to the project in order to support it. 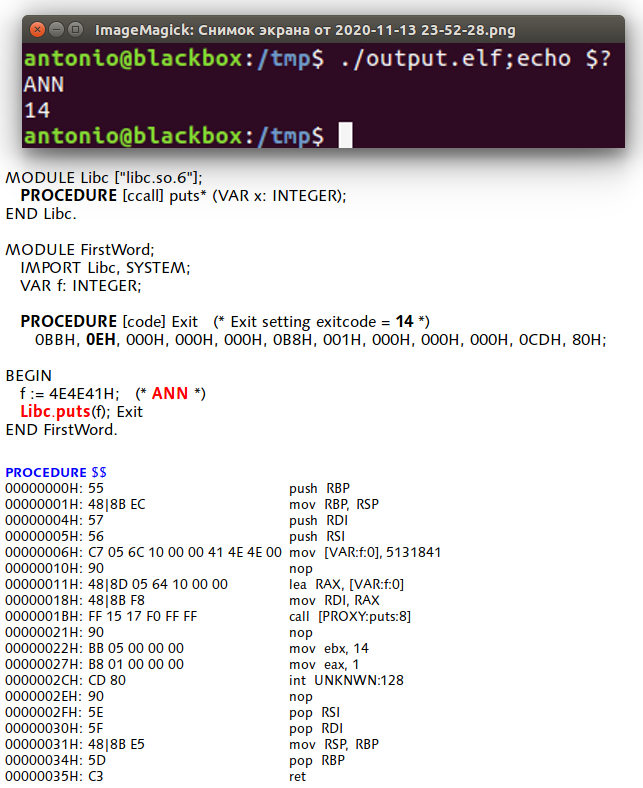